A lobster boil meal is a tradition in coastal towns, particularly in the Northeastern United States. But this spring, you can enjoy this flavor sensation right here in Las Vegas. While Las Vegas is undoubtedly miles and miles away from the closest ocean, we’re bringing a bit of the shore to you, all August long, with our unique and highly satisfying Hearthstone Lobster Boil special.

The Hearthstone Lobster Boil: what you need to know

Let’s start by giving you the 411 on our late summer special. All April long, from Sunday through Thursday, from 5pm until close, of each week, we’re offering the Hearthstone Lobster Boil special. For just $24 per person, you’ll be treated to a spectacular seaside style feast, featuring a whole lobster, clams, half corn cobs, andouille sausage, and creamer potatoes. It’s served with an irresistible shellfish broth, wine, parsley, garlic, and chorizo aioli, and it’s addictive.

What the heck is a lobster boil?

If you didn’t grow up near the ocean, there’s a strong possibility that you have no idea what a lobster boil entails. If you did grow up by the ocean, chances are that the phrase brings up nostalgic memories. Whether the lobster boil is old or new to you, let’s offer a brief refresher on what it is and what is involved in its construction.

Believe it or not, the time-honored tradition of the lobster boil may actually have roots dating way back to the times of the pilgrims. Upon settling in Plymouth, Massachusetts, settlers are said to have seen Native American residents cooking clams over hot stones; they quickly adopted the practice themselves, and the New England Clam Bake was born. It eventually became a summertime tradition in New England and beyond.

Eventually, boiling the seafood became a valued alternative, as it was less labor-intensive and allowed chefs to cook whatever seafood and produce was available in a big pot. This “seafood boil” often included lobster.

Believe it or not, back then, lobsters were not considered a delicacy. Actually, lobster was so abundant that it was considered a very humble food, and was actually used in decidedly non-gourmet ways, including being used as prisoner food; it was also employed as an ingredient in animal feed.

It wasn’t until lobster received a massive rebranding in the 1800s as a luxury food served in railway cars that it began to be seen as a delicacy. Ironically, its new superior status caused a demand that made lobster far more rare!

The New England style lobster boil is a marriage of old school tradition and modern sensibilities. It’s simultaneously nostalgic but can also be quite upscale at the same time, particularly when high quality ingredients are employed, and they are prepared by a masterful chef. 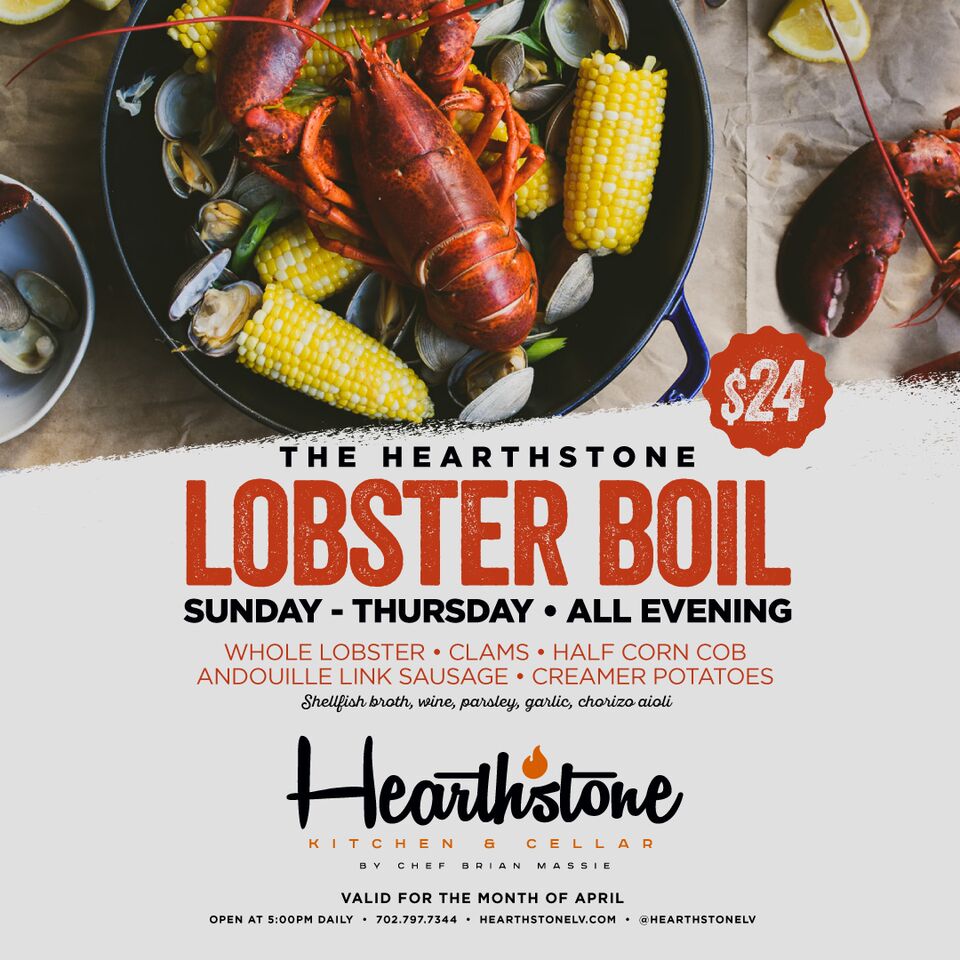 In a nutshell, lobster and other ingredients (in the case of Hearthstone’s variation, clams and corn) are combined in a flavorful broth and boiled to perfection. The controlled heat allows all of the flavors to meld while cooking, rendering each ingredient absolutely flavor-packed, and juicy and irresistible in texture. To taste a classic lobster boil is to experience the pure, distilled essence of summer in a single dish.

Since this is a dish featuring relatively few ingredients, it’s important to use the best ones that you can possibly find. At Hearthstone, we know that food providers matter, and always strive to find the freshest and best ingredients possible for every dish we serve.

What should I drink with it? What beverage is best to pair with the Hearthstone Lobster Boil? Well, that depends on your personal style and who you ask! Some will say that the best pairing for a lobster boil is a cold beer. If you’re part of that camp, we’ve got plenty of beers by the bottle or on draft for your pairing pleasure, from classics to microbrews.

However, a lobster boil also pairs elegantly with wine, particularly full bodied whites. A nice, buttery Chardonnay, of which we have several different types on our menu, is a perfect pairing. Sparkling wines also pair surprisingly well with the rich flavors of the seafood, adding a buoyancy to the dish.

If I love the lobster boil, what will I do when April is over? It’s true: this special won’t last forever. Obviously, the best solution is to make sure that you come in as often as possible to enjoy this culinary masterpiece while it’s on special! However, if you are unable to make it to Hearthstone during the duration of this special, we urge you not to despair, for two reasons:

First, we always have something fantastic on special, and as summer fades into fall, you’re guaranteed to find another special coming up that is equally incredible. No, it won’t be the same as the Hearthstone Lobster Boil, but knowing our talented Chef, it’s bound to be excellent.

Second, if you’re a seafood lover, there are additional items on our regular menu that can satisfy your craving after the special is over. The “Shellfish and Seafood” section on our menu includes cocktail shrimp, shellfish platters in multiple sizes, and fresh oysters. You can also score a New England lobster roll, bacon-wrapped scallops, shrimp and grits, or our rotating fish special.

A lobster boil is something that truly should not be missed. To savor this sunshine-filled flavor sensation, come by one of the most beloved Summerlin restaurants from Sunday through Thursday, all April long, to experience the Hearthstone Lobster Boil.

Have you ever tried a lobster boil?