Do you love a crispy, crunchy order of chicken wings? Yeah, we do too. This is why this year we are celebrating National Wing Day in style with an unreal special and a super fun celebration that is all about our delicious chicken wings. Whether you like them hot and spicy, sweet and sticky or just like a classic chicken wing—your love of chicken wings is worth celebrating, and Hearthstone is here with a bottomless special that will tickle your tastebuds all evening long.

National Wing Day is July 29th and in honor of this holiday we will be celebrating with $10 Bottomless Chicken Wings, all evening! Just because we are so excited about this promotion and about all things chicken, we have compiled some of our favorite fun facts about chicken wings.

Buffalo Wings Were Actually A Mistake

It is a little crazy to think about now, especially considering how much we all love chicken wings, but the original buffalo wing was actually a mistake, according to a story from Anchor Bar in Buffalo, NY. When the establishment received chicken wings instead of chicken necks, serving chicken wings with sauce was suddenly born. It is believed that Frank’s Red Hot was the sauce that was used on this first ever batch of wings.

Buffalo, NY is known for being the capital of chicken wings, thanks to the Anchor Bar, and buffalo wings even grew in popularity thanks to the NFL team the Buffalo Bills. The city took their love of chicken wings even farther in 1977 when the mayor of Buffalo proclaimed that July 29th was official National Chicken Wing Day. Clearly, we still celebrate the holiday today. 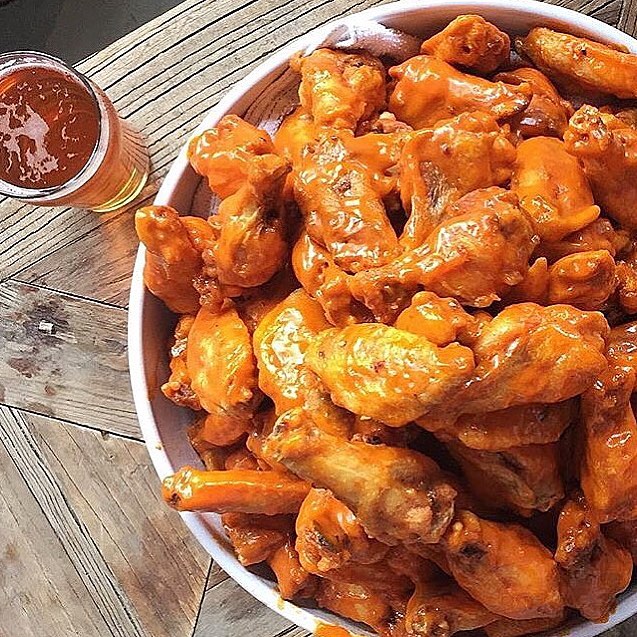 There is an Annual Wing Bowl

At the annual Wing Bowl, chicken wing lovers compete to see who can devour the most wings in a sitting. In the 2015 Wing Bowl, the record was set when Patrick Bertoletti ate 444 wings at the competition. That year another record was set when the runner up, Molly Schuyler came in second, eating 440 wings and setting the record for females. Talk about a love of chicken wings.

Ranch is Actually the Most Popular Dipping Sauce

Chances are when you talk to any wing lover, they will have a firm stance on which dipping sauce is the best. However, for those who are in it for the ranch vs. bleu cheese debate—ranch is actually the most popular, with bleu cheese coming in second.

You Can Get Bottomless Wings on July 29th for Just $10

If you love chicken wings and want to devour as many as you can in honor of this national holiday, then come down to Hearthstone for bottomless wings. This is perhaps our favorite fun fact about wings—we are offering bottomless chicken wings all evening for just $10. Talk about a great way to celebrate this holiday and get your ultimate chicken fill.