There’s nothing better than a summertime meal of lobster, and that’s why we’ve brought back Lobster Mondays at Hearthstone. Every Monday, join us for a delicious lobster boil for just $26. You won’t find a better lobster boil in Summerlin, making Mondays the perfect time to gather up the family and head out for a dinner that you don’t have to cook.

So that you can dig right in and enjoy your lobster, these tips will help you learn how to break down and eat a lobster.

When you’re getting ready to break down and eat a lobster, you’ll need the right tools. This can be a messy process, so it’s a good idea to wear a lobster bib and put some paper down on your table. Have a fork, some nutcrackers or shell crackers, a lobster pick, and maybe even a hammer on hand. Some lobsters are relatively easy to break down, but if you have one with a tougher shell, you’ll be glad to have that hammer available.

Start with the Tail

Breaking down a lobster can be a little overwhelming if you’ve never done it before, but don’t worry – it’s not actually that hard. Just go piece by piece, starting with the tail.

Hold the lobster body in one hand and the tail in the other, then twist your hands in opposite directions to break the tail off. Next, put the tail on the plate and push down hard with both hands until you hear the shell crack. Then, break off the tail’s flaps by twisting and pulling. Then, use your fork or a lobster pick to pull off the meat from the tail – it will come off in chunks.

Twist Off the Claws

Use your hands to twist off the claws at the joint that’s closest to the lobster’s body. Be careful not to catch yourself on the sharp edges and spikes of each claw.

Once the claws are removed, rip the thumb off of the claw, then use a nut cracker or claw cracker to crack open the claw shell and remove the meat. If the claw is really hard, you may need to use a hammer to help break open the shell. 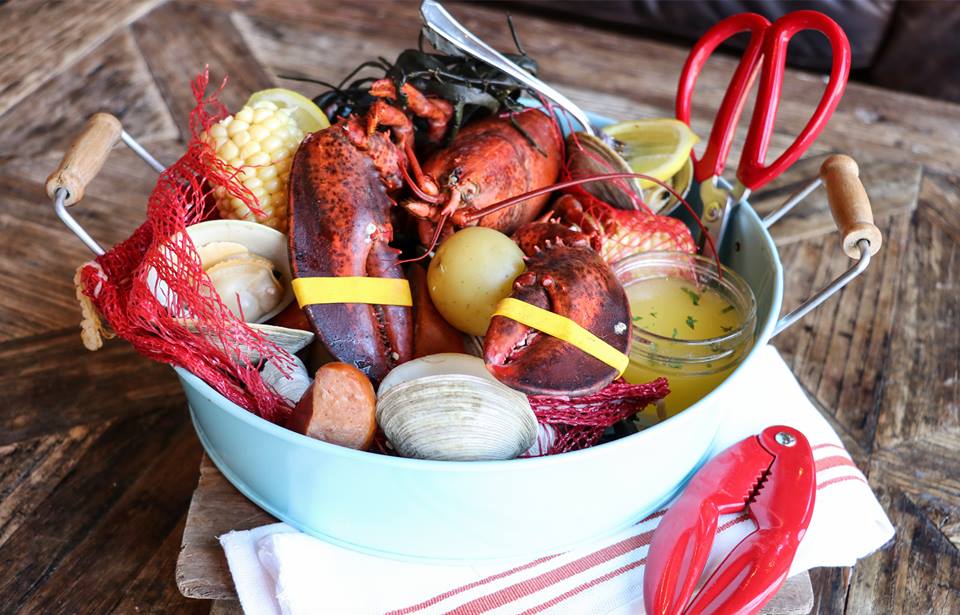 After you’ve removed the meat from the claws, work on removing the knuckles, which are the sections between where you separated the claws and the lobster’s body. You can pull these knuckles off with your hand, then use a lobster pick to push the meat out of each knuckle.

Pull Off the Legs

The legs are easier to remove; you can pull and twist them off with your hands, then suck the meat out of each leg.

Break Down the Body

The lobster’s body takes more work than the other parts, so it’s good to work up to the body and build your confidence through the process. This is also the messiest part of breaking down a lobster.

Start by holding the body near where the tail was, and pry up the shell with your hand so that you can reveal the lobster’s rib cage. This takes some strength to accomplish. Then, use a pick or a fork and push the meat up, away from the ribs. Smaller lobsters won’t have much meat in their bodies, but taking this extra step can yield some extra meat in larger lobsters.

Breaking down a lobster can seem a little overwhelming at first, but it’s also a great skill to learn and will even allow you to cook and enjoy lobster at home. With a little practice, you’ll become a pro at breaking down and eating lobster, and you’ll be able to enjoy all of our Lobster Mondays

We brought Lobster Mondays back at Hearthstone thanks to popular demand, and we’re thrilled to once again offer you a delicious lobster boil. We boil up whole lobsters, clams, corn on the cob, andouille link sausage, and creamer potatoes for a hearty, filling, and piping hot meal. The foods are boiled in shellfish broth, wine, parsley, garlic, and chorizo aioli, giving them the wonderful flavor that Hearthstone dishes are known for.

You can enjoy all of this for just $26, but hurry – lobster boils are here just for the month of June. These events are very popular, so RSVP a table ahead of time.